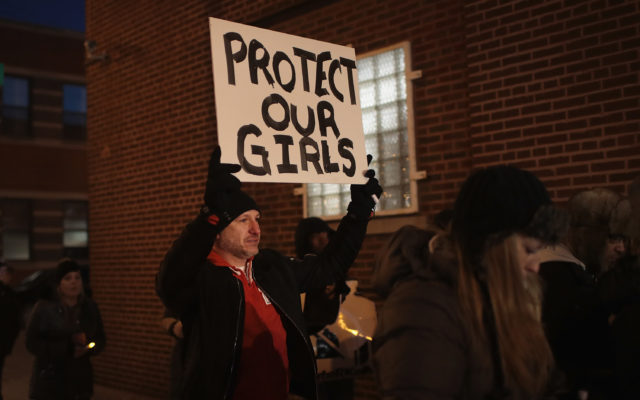 CHICAGO, ILLINOIS - JANUARY 09: Demonstrators gather near the studio of singer R. Kelly to call for a boycott of his music after allegations of sexual abuse against young girls were raised on the highly-rated Lifetime mini-series "Surviving R. Kelly" on January 09, 2019 in Chicago, Illinois. Prosecutors in Illinois and Georgia have opened investigations into allegations made against the singer, whose real name is Robert Sylvester Kelly. (Photo by Scott Olson/Getty Images)

It was a touching moment onstage when R. Kelly’s alleged victims helped accept the award for best documentary at the MTV Movie & TV Awards after bravely lending their voices and stories to Lifetime’s Surviving R. Kellydocumentary.

The doc, which premiered earlier this year and sparked (and re-sparked) numerous investigations into the R&B singer, beat out other critically acclaimed docs, including At the Heart of Gold: Inside the USA Gymnastics Scandal, RBJ, Minding the Gap and McQueen.

Although Kelly continually denies sexually and physically abusing women throughout his career, he was charged back in February with ten counts of aggravated sexual abuse in connection with four victims, three of whom are underage. He pleaded not guilty.

Also, last month Kelly was charged with 11 felony counts of sexual assault and sexual abuse, stemming from a 2010 incident with a then underage Jerhonda Pace. The singer pleaded not guilty to these counts as well.

CLICK HERE to read the original/full story from www.essence.com