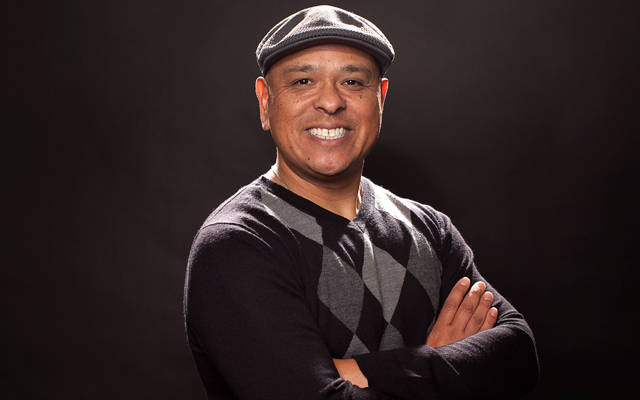 If you have ever heard someone say something unkind about Xavier “The X-Man”®, call us now because it would be the first.  He is truly one of the nicest and most sincere, down to earth people you will ever know. You can feel it just by listening to his radio show. Honest! His love and concern for his fans are so real. It shows when he answers the phone, promotes his radio stations with a personal appearance, reads a letter from a listener, or shares a dedication. There’s nothing not to like about Xavier “The X-Man”®.

After seeing his name in print, it’s easier to figure out why he’s called Xavier “The X-Man”… though it looks it would be pronounced “Zavier” or “X”avier. Xavier’s mother decided to pronounce it Javier in memory of her brother. Up until age ten, Xavier didn’t know the origin of his name until his mother told him that she had been reading a book of saints and came upon the name of Saint Frances Xavier, so she gave her son the name.

He was born in Fort Ord, California and grew up in a “MexiPino/FiliXican” household (Xavier’s mother is Mexican and father is Filipino) in East Salinas where he attended Alisal High and learned radio at KHDC 90.9fm, a community radio station until going off to college at San Jose State University. During college, he worked at KSJS and programmed a show called RADIO AZTLAN (The Brown Berets of the Airwaves), he also held on air gigs at KHQT Hot 97 in San Jose as well as 102.5 KDON in Salinas. His studies at SJSU earned him a Bachelor of Science degree in Public Relations with a minor in Radio/TV/Video & Film. After college, he launched his career in San Francisco at WILD 94.9 as the Host of “Turn Off the Lights” and “Xavier The X-Man’s® Sunday Night Oldies Show”. After being number one for several years Xavier landed a job in Los Angeles at Mega 100 LA’s Jammin Oldies. A two-year run there landed him a new time slot (afternoons) and Assistant Program Director role in San Diego at MAGIC 92.5 “San Diego’s Old School”. Xavier can now also be heard on 105.1 K-OCEAN, “Your Generations Old School” in mornings on “THE X-MAN’S MORNING SHOW”. There’s no denying that he’s a busy man, filling up the air waves with his radio shows up and down the west coast, but he truly loves it!

Today, Xavier likes to dance a lot! Put on some music, Old School, Salsa, Cumbias, Rancheras, Tex-Mex, Swing, it doesn’t matter, the guy can move! But just don’t ask him to enter a dance contest- because he hasn’t had the guts to yet.

Xavier also loves to golf. He’s got the muscle to drive a ball 250 yards, but says it’s not about strength. It’s about hitting the ball straight. His goal with this sport is to play every golf course in California . And here’s something else “The X-Man” can’t turn down a golf challenge. Try it. He’ll probably meet you the next day.

The X-Man also has a big LOVE for Lowriders & the Lowrider Lifestyle. His lover affair for Lowriders started at the early age of seven when his neighbor asked him to help him wash his Chevy Bomb. That pretty much started it; he was hooked.  He appreciates all things on wheels, including Customs and Hot Rods but his first love are Lowriders.  He has two of his own called “Doing It To Death”, a 1961 Chevy Impala Convertible & “Mal Hecho”, a 1951 Chevy Fleetline Deluxe.  His cars have been featured in Lowrider Magazine & Impala Magazine.  He was also featured on the Travel Channel’s “Trip Flip” explaining the Lowrider Culture and the “California Burrito”.  Be on the lookout for his cars at the next car show or on the streets-he’s always crusin’.

On the more serious side of Xavier, you’ll find his intense love of the community, doing much of his outreach in the Latino and Filipino communities, with a special passion for giving to children’s causes. It’s genuine, the real deal. You can find him at community events big or small helping make a positive change in the community, from being the MC or just showing up to support the events or announcing them on his radio shows. He even loves going to schools to spread the message of the importance of going to college. Incredible that the guy is not running for a political office!

Don’t be surprised if in the future you hear “The X-Man” on stations across America. His own syndicated Oldies show is slowly spreading across the country and can be heard in San Diego, Phoenix,  Santa Maria, & Bakersfield.